London based clothing brand for the go-getters, dream-makers and those that are a cut above the rest.

March is now the month of celebrating women; kicked off with International Women’s Day which is growing each year, it’s only right that Mother’s Day rounds it off. It’s a day where we truly feel you should remind your mum of what a champion she is to you. For those of us who’s mums are no longer with them it’s a time to reflect on all the special memories and all the things she bestowed upon you. It’s a great opportunity to show appreciation for all the women in our lives who also step in to fulfill the role of our female guardian angels and caretakers regardless of whether they’ve given birth to you.

We spoke to the King’s Ransom mums’ to find out what their motherhood experience was like, how it changed their lives and what they did to raise two strong-willed girls who have been plotting world domination since they were in nappies…

M: Did  you always want children?
E: Yes.
M: Mum! You can’t just say yes! You need to elaborate, saying yes hardly makes for a good read does it!
E: *laughs* Probably from the age of 10 or 11, it entered my mind that I would grow up, get married and have kids.
M: Was it always important to you to be married before you had children?
E: Yeah, that’s how I saw it play out.
M: When you’re that young, you obviously have an idealistic view of life, but when you got to 25, which is my age now, what was your realistic view?
E: At 25 I wanted children but we’d only just started living together in a one bed rented flat and I wanted my life to be more secure before bringing children into the world.
M: You did think you were pregnant round that time though didn’t you?
E: Yeah and that was a bit of a shocker. We’d literally been living together for 2 or 3 months. I phoned my mum for advice and I was nervous about telling her, I really played it down and said I wasn’t concerned about my period being late but I obviously was worried. She said “you’re probably just constipated!” My period came shortly after that conversation so turned out I wasn’t pregnant after all! *laughs*
M: *laughs* So when you actually had me you were 31, from a career perspective what were your thoughts on how motherhood would affect your work?
E: With the job I had as a draughts-woman, I felt I could dip in and dip out and be flexible. Before I left I did a course in computer aided design which was the way forward in technical drawing at the time. I didn’t like it much because I didn’t think there was the same level of skill involved as you doing it freehand. Regardless, the course enabled me to stay in the loop work-wise once I’d had you. I always wanted to be a fully involved stay at home mum if I was lucky enough to. I was really lucky your dad provided for us to the extent that I comfortably could. I know not everyone gets that opportunity. 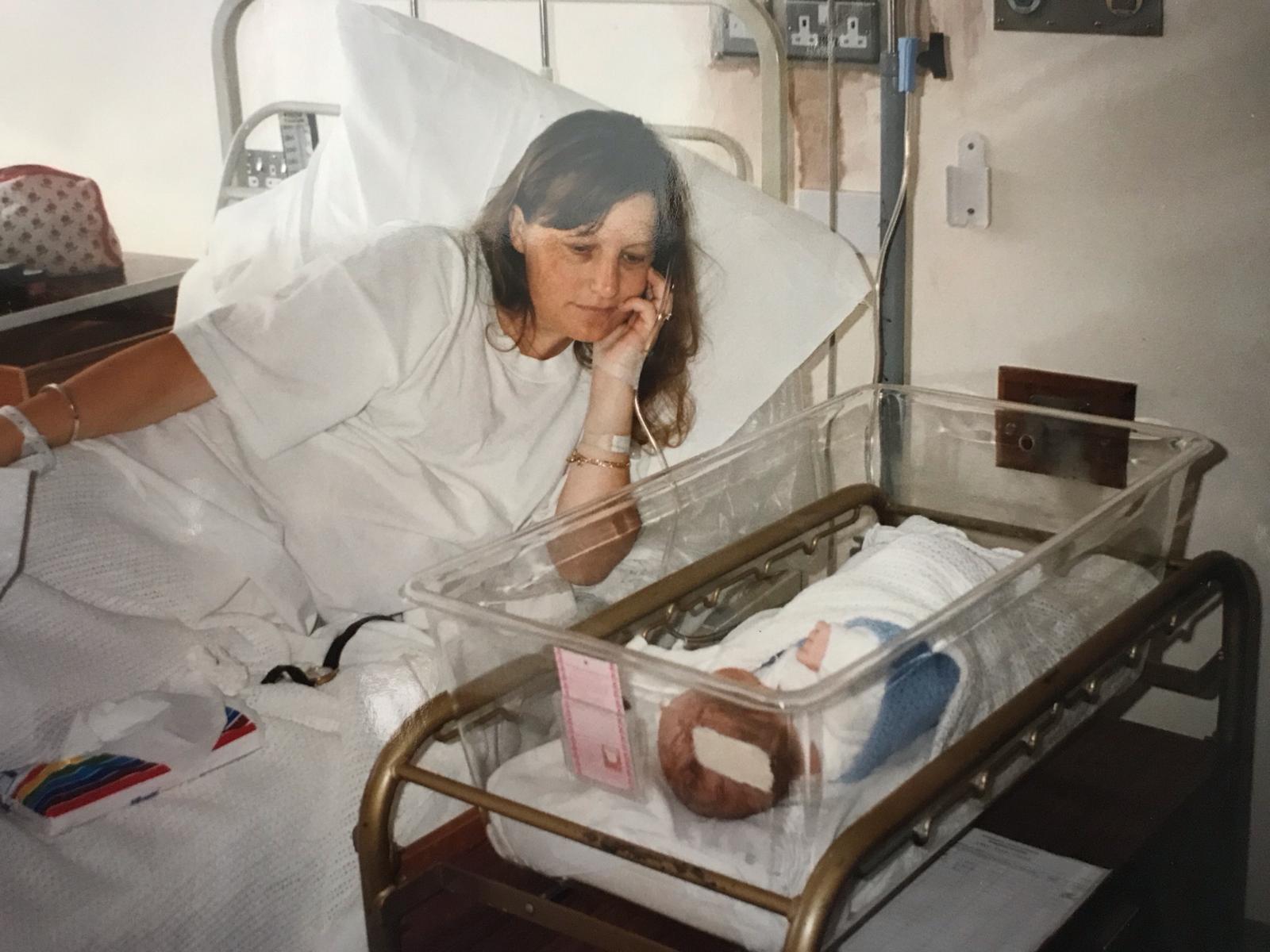 M: Did you feel that was quite an old school decision for the time?
E: Yeah I did, I was the only one in my age group from my antenatal classes who was staying at home. Most of the other women from the group were determined they’d be going back to work. The three or four I got really friendly with didn’t go back to work either in the end, until their children were older.
M: What don’t they tell you about being a mum?
E: They don’t tell you what the sleep deprivation does to you! Or how motherhood tries your patience. Before you’re a parent, you have some idea as to how it’s all going to go, which doesn’t always go according to plan. I was grateful that I was able to have a lie in if you’d had a disrupted night’s sleep and being able to spend that time without worrying about getting up for work the next day. You can have ideas about how you’ll bring your child up but your child is their own little person and won’t always conform to your ways. You want to allow your children to have a bit of freedom without ending up precocious.
M: What’s it been like bringing girls up in the world? You’ve instilled a lot of confidence, independence and not taking any shit basically into us…do you feel like that was something you consciously focused on?
E: I grew up with three sisters so we didn’t have a lot of men in our family. Our dad always taught us that we could do just as well if not better than any man on the planet and be anything you wanted to be. My dad was against the attitude that was common back then of us having to do a “woman’s” occupation. I thanked him for instilling that in me, so it’s definitely something that was important to me to pass on to my daughters. I think you must give your daughters as much confidence in themselves, their body image etc without making them arrogant.

M: Yeah you don’t want to dull someone’s shine but you don’t want them to turn into a prick.
E: Yeah you don’t want to indulge them all the time and make them into princesses. I never wanted that, I wanted strong, confident young ladies who could go out in the world and fend for themselves if they have to. It’s nice if you can find a partner for life, or even if you can have 3 partners in your lifetime…
M: All at the same time?
E: *laughs* all at the same time, yeah definitely! No, you want them to be able to stand on their own two feet, so that if they’re ever in a relationship where someone is trying to dominate or put them down, they would have the confidence to walk away.
M: How would you describe your personal style? I think it was quite different to other girls at the time right?
E: I’d say an eclectic mix of vintage and what’s current. I didn’t feel the need to always wear exactly what was on trend if it didn’t suit me. Plus being petite it was tricky sometimes. I was also not the girl who would buy the outfit that’s in the shop window. I liked to mix and match vintage with newer stuff. I still veer towards that because some of it was so well made then, with better fabrics. I always loved jeans, when everyone was wearing 12 inch flares I was wearing straight legged jeans. The straight legged jeans gave me height, if you’re 5 foot in flares you just look stupid. It also meant I wasn’t flapping about in soaking wet denim up to my knees! Especially growing up in Scotland, the flares soaked the rain up like a sponge.

M: I had some interesting outfits when I was young, didn’t I? And of course we had lengthy discussions as a child about what I’d be wearing…
E: No we didn’t really discuss it because you’d just say no to everything I tried to put you in, so I’d end up saying “ok, just choose what you like” because I’d get so frustrated by it. When we went shopping it was always your choice what we bought. Number one being your crushed velvet pink dress.
M: Mate, that was a look! Baby spice had one.
E: What I found interesting we’d end up in the same colours on the same day without realising. You started choosing your outfits from about eighteen months!
I remember your Auntie coming round and you had a little red and cream pinafore dress with a cream roll neck which you picked out. She said “Meghan, that’s a beautiful outfit you’ve got on today” and you said “I know I chose it myself!”

M: That’s so funny! What did you think when I started King’s Ransom? I already know but tell the people…
E: *laughs* I was very proud that you and Komali had a vision for something you wanted to do on your own. I always knew you’d work for yourself and be a key person in the decision making. I think everything the pair of you have done has been amazing. You both bring different skills to the table that I think compliment each other.
M: We’re like ying and yang. What did you think I’ll do when I grow up?
E: I always knew you’d do something creative and that you’d be in charge of.
M: Yeah, I guess I’ve followed in Grandpa and Dad’s footsteps in that respect, carrying on that legacy of working for myself.
E: Yeah and not sit around waiting for something to be given to you.
M: What have been some of your proudest moments as a parent?
E: It’s been watching you stand up for yourself, having the confidence to tell the truth, your love, loyalty and support for your family. It’s lovely to see when you invest that in your children they begin to give the same back to you as they become adults. I love the fact you feel you can step in and take charge when it’s needed to support others. Even as a parent you don’t always say the right thing to do and sometimes it only takes the people that know you best to step in and help.
M: You managed to say all that without a tear in sight!
E: Yeah on the second time round! 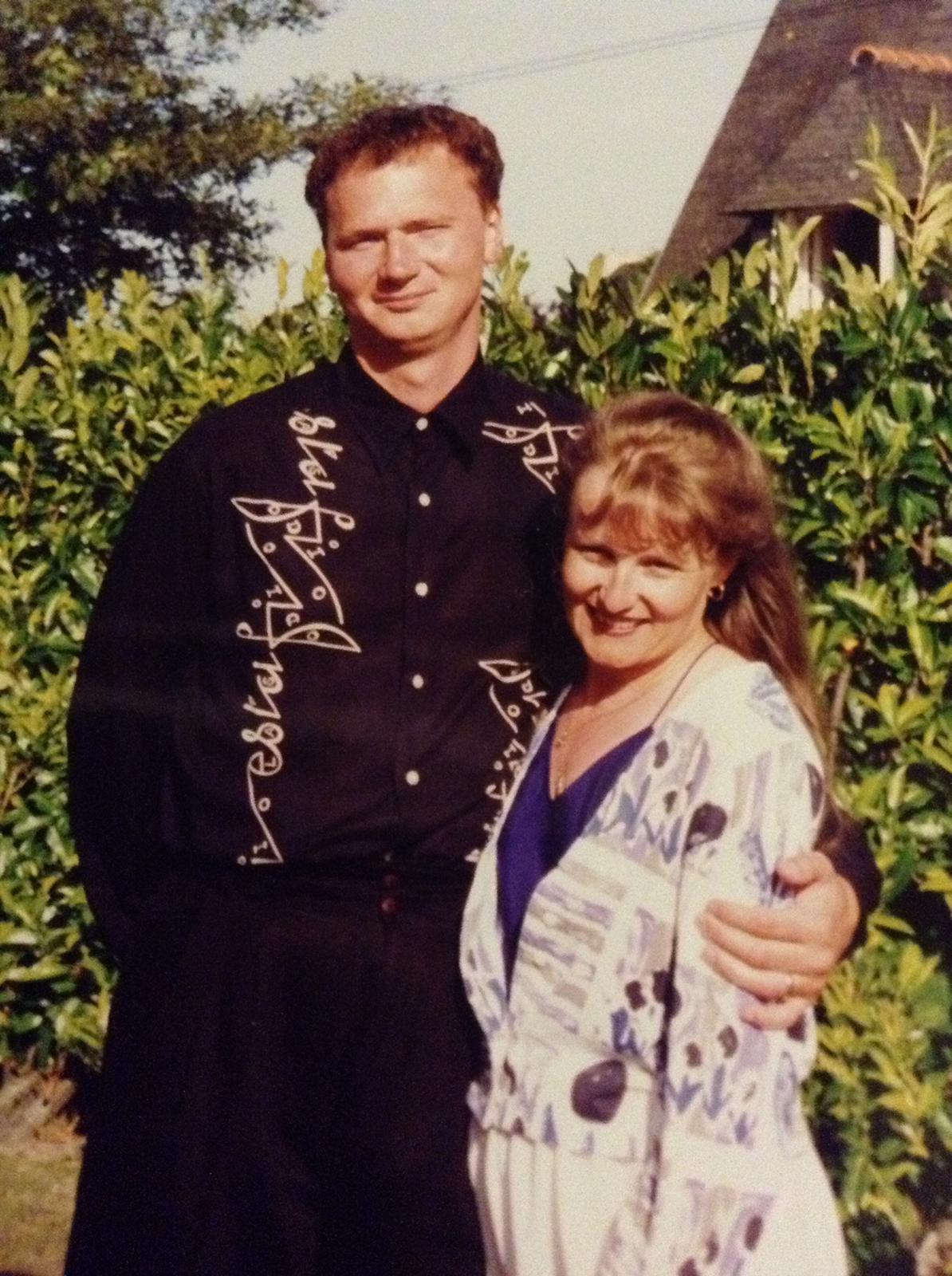 M: What would you say to your 25 year old self now?
E: I thought the person I was then would be the person I was going to be for the rest of my life. I had confidence, I was in a loving and stable relationship, without sounding smug, I felt like I had everything I wanted. Me and your dad only really needed each other. I thought I knew where my life was going and it panned out pretty much how I thought it would. When I got to about 45 and we went through what we did as a family, made me realise I was stronger and smarter than I thought. Sometimes when you’re bought up with the idea that professionals like lawyers, accountants or whoever, know better than the rest of us. When you have to engage with them in a pressured situation, you realise you’re twice as good as them in certain ways. It gave me more confidence in myself. It also showed me that I have my family’s love and support at all times. Knowing someone always has your back is what drives people on in life through hard times.
M: So basically you’d tell yourself that you’re a smartie pants and did everything right then….
E: *laughs * Well I’d tell myself not to doubt myself.
M: Well that’s the reason I am the way that I am; it’s important to have a mum who is a direct example of how to be. Especially when one of us is ill or during business and legal situations. When you get to a certain age you stop only seeing your mum as a mother but also as a woman.
Growing up your focus was always our family but then to watch you take on lawyers, look. after your husband when he was  ill was amazing to me. To see you handle situations where you’re having to look after your own emotional state as well as the rest of us, plus the financial state of the household and taking that in your stride was massively influential to me.
E: Good! Stoic is what they say. *scottish accent*
M: Stoic! *scottish accent*